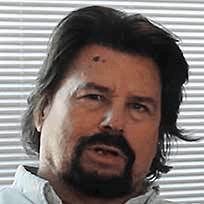 Randall Frakes is a film and science fiction writer primarily known for his work with long-time friends Bill Wisher and James Cameron on The Terminator and Terminator 2: Judgment Day.
While Frakes was in the U.S. Army, he was stationed in Europe, where he edited the newspaper for the 16th Signal Battalion. While editor, he won a Stars and Stripes award for investigative journalism.
After the Army, he earned a degree in Film Writing and Production from Columbia College, while also writing for Analog, Fantastic, and Fantasy & Science Fiction.
His first film work was as a special effects cameraman for Roger Corman, and a number of unproduced screenplays, before his collaborations with Wisher and Cameron, kicked off his professional film-writing career.