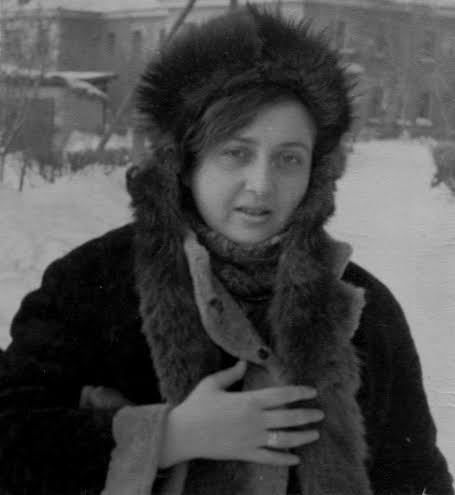 Regina Derieva (; February 7, 1949 – December 11, 2013) was a Russian poet and writer who published around thirty books of poetry, essays, and prose. From July 1999 until her death she lived in Sweden.
Joseph Brodsky called Derieva "a great poet", stressing that her poems are hers "only by name, only by her craft". "The real authorship belongs here to poetry itself, to freedom itself. I have not met anything similar for a long time, neither among my fellow countrymen nor among English-speaking poets". Tomas Venclova has stated that " Regina Derieva was, first and foremost, a Christian poet, a worthy heir of a long line of metaphysical poets, be they English, French or Russian. Far from any inflated rhetoric or didactics, her poems reached the very core of the Christian experience, which meant serious and fearless attitude to life, suffering and death. The imagery and syntax of the Gospels and the Books of Prophets was, for her, a natural element just as apocalyptic presentiments and mystical hope formed the axis of her world-outlook". Les Murray has a blurb on the back cover of Derieva's Alien Matter : ”Science teaches that eighty percent of the universe consists of dark matter, so called. Regina Derieva learned this same fact in a very hard school. She does not consent to it, though. She knows that the hurt truth in us points to a dimension where, for example, victory is cleansed of battle. Her strict, economical poems never waver from that orientation”.
Derieva's work has been translated into several languages, including English, French, Swedish, Arabic, Italian, Chinese, Thai, Greek, and other languages. A compact disc with her readings in Russian of selected poems was issued in 1999. Derieva's work has appeared in the Poetry magazine, Evergreen Review, Modern Poetry in Translation, Poetry East, The Liberal, Ars Interpres, Salt Magazine, Quadrant, Notre Dame Review, Dublin Poetry Review, Quarterly Literary Review Singapore, Words Without Borders, St. Petersburg Review, Poetry International, Artful Dodge, Atlanta Review, POEM Magazine, The Hopkins Review, The American Poetry Review as well as in many Russian and Swedish magazines.
She translated poetry by Thomas Merton and contemporary American, Australian, British, Polish, and Swedish poets. Regina Derieva participated in a number of Swedish and international poetry festivals.
Derieva's poetry is strongly affected by her Catholic faith. In 1996, a significant Italian composer and organist, Fra Armando Pierucci, composed a cantata for the series of Regina Derieva's poems. This cantata is titled Via Crucis. In 2003, she received the Shannon Fellowship of the International Thomas Merton Society. In 2009, the Catholic Church of Sweden awarded her the ORA ET LABORA medal for her literary work to benefit the Church.
Regina Derieva's funeral took place on December 23, 2013, and she is buried at the Norra Begravningsplatsen (Katolska Kyrkogården) in Stockholm. The volume of poetry, memoirs, essays, fiction, and photographs in honor of Regina Derieva, Curator Aquarum, was published in 2015. Her papers are at Stanford University.