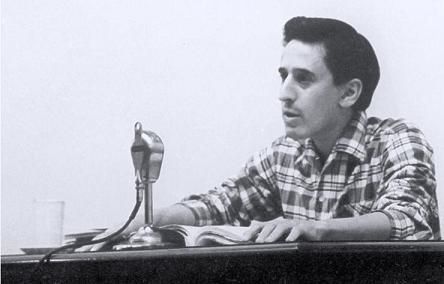 Roque Antonio Dalton García (San Salvador, El Salvador, 14 May 1935 – Quezaltepeque, El Salvador, 10 May 1975), born Roque Antonio García, better known as Roque Dalton, was a Salvadoran poet, essayist, journalist, political activist, and intellectual. He is considered one of Latin America's most compelling poets. He wrote emotionally strong, sometimes sarcastic, and image-loaded works dealing with life, death, love, and politics.
Even though he never received an academic degree, he took part in higher education at the University of Chile and the University of El Salvador, where he studied law. He also visited the National Autonomous University of Mexico. While in Chile, he began to study Marxism and on returning to El Salvador, he became a significant player in local politics. He began working with poetry after helping found the University Literary Circle. He joined the Communist Party of El Salvador. He was imprisoned in 1959 and 1960 for inciting revolt during the presidency of José María Lemus.
In 1961, he was exiled from El Salvador, spending 1961 in Mexico, then moving to Cuba, where most of his poetry was published., where he completed his development as an author, but also in México and Czechoslovakia. In Cuba, he became involved in the culture and received military training after the Bay of Pigs Invasion. After returning to El Salvador in 1965, he was arrested and interrogated by an agent of the Central Intelligence Agency. In 1969, he returned to Cuba and then Prague, Czechoslovakia to work as correspondent for The International Review: Problems of Peace and Socialism. In the same year, he won the Poetry Prize Casa de las Américas for his book Taberna y otros lugares.
After leaving Cuba, Dalton became involved in El Salvador's civil war, joining the People's Revolutionary Army (ERP) in 1973. In the ERP, he found himself in a serious internal dispute with leader Alejandro Rivas Mira, who was becoming an influential leader of the armed group. As a consequence, the leadership of the ERP decided to execute him alongside.
He is remembered for his bohemian lifestyle and the jovial, irreverent personality reflected in his literary work, as well as his commitment to social causes in El Salvador. His work is diverse, going beyond the influences of his Marxist beliefs. He is considered one of the most influential Salvadoran writers. Posthumously, he has received recognition as "Hijo Meritísimo" and "Poeta Meritísimo" by the Salvadoran government and an honorary doctorate degree from the Universidad de El Salvador.