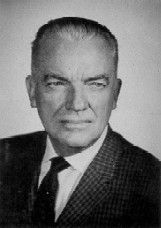 Scott O'Dell (May 23, 1898 – October 15, 1989) was an American author of 26 novels for young people, along with three novels for adults and four nonfiction books. He wrote historical fiction, primarily, including several children's novels about historical California and Mexico. For his contribution as a children's writer he received the biennial, international Hans Christian Andersen Award in 1972, the highest recognition available to creators of children's books. He received The University of Southern Mississippi Medallion in 1976 and the Catholic Libraries Association Regina Medal in 1978.
O'Dell's best known work is the historical novel Island of the Blue Dolphins (1960), which won the 1961 Newbery Medal and the 1963 Deutscher Jugendliteraturpreis in its German translation. It was also named to the Lewis Carroll Shelf Award list. He was one of the annual Newbery runners-up for three other books: The King's Fifth (1966), The Black Pearl (1967), and Sing Down the Moon (1970).