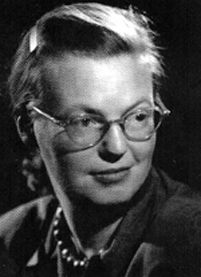 the physicist who is president of Rensselaer Polytechnic Institute Shirley Ann Jackson} Shirley Hardie Jackson (December 14, 1916 – August 8, 1965) was an American writer, known primarily for her works of horror and mystery. Over the duration of her career, which spanned over two decades, she composed six novels, two memoirs, and over 200 short stories.
A native of San Francisco, California, Jackson would later attend Syracuse University in New York, where she became involved with the university's literary magazine and met future-husband Stanley Edgar Hyman. The couple settled in North Bennington, Vermont in 1940, after which Hyman established a career as a literary critic, and Jackson began writing.
After publishing her debut novel The Road Through the Wall (1948), a semi-autobiographical account of her childhood in California, Jackson would garner significant public attention for her short story "The Lottery," which details a secret, sinister underside to a bucolic American village. She would continue to publish numerous short stories in literary journals and magazines throughout the 1950s, some of which were assembled and reissued in her 1953 memoir Life Among the Savages. In 1959, she published The Haunting of Hill House, a supernatural horror novel widely considered to be one of the best ghost stories ever written.The Haunting of Hill House has been ranked as the 8th "Scariest Novel of All Time" by horrornovelreviews.com, and in Paste magazine's unsorted "30 Best Horror Books of All Time", Tyler R. Kane said, "If you go by the consensus of the literary community, Haunting of Hill House isn’t only a book that revolutionized the modern ghost story—it’s also the best."}
A reclusive woman, Jackson remained in North Bennington for the last years of her life, and was reluctant to discuss her work with the public. By the 1960s, her health began to deteriorate significantly as a result of her increasing weight and cigarette smoking, ultimately leading to her death of heart failure in 1965 at the age of 48. Jackson has been cited as an influence on a diverse set of authors, including Neil Gaiman, Stephen King, Sarah Waters, Nigel Kneale, Joanne Harris, and Richard Matheson.