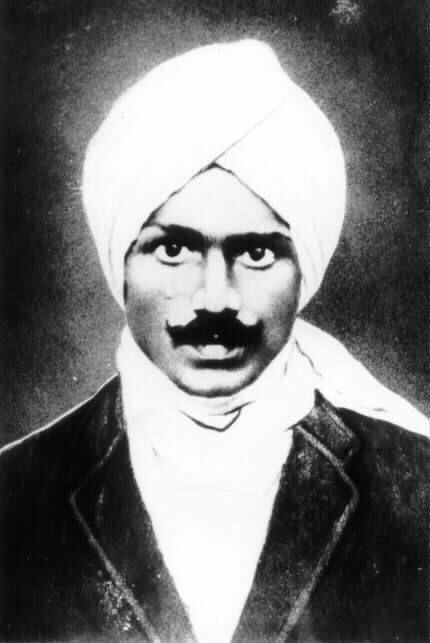 Chinnaswami Subramania Bharati, also known as Bharathiyar (11 December 1882 – 11 September 1921) was a Tamil writer, poet, journalist, Indian independence activist and a social reformer from Tamil Nadu. Popularly known as "Mahakavi Bharati", he was a pioneer of modern Tamil poetry and is considered one of the greatest Tamil literary figures of all time. His numerous works included fiery songs kindling patriotism during the Indian Independence movement.
Born in Ettayapuram of Tirunelveli district (present day Thoothukudi) in 1882, Bharati had his early education in Tirunelveli and Varanasi and worked as a journalist with many newspapers, including The Hindu, Bala Bharata, Vijaya, Chakravarthini, the Swadesamitran and India. In 1908, an arrest warrant was issued against Bharati by the government of British India for his revolutionary writings, forcing him to flee to Pondicherry (city), where he lived until 1918.
Bharati's influence on Tamil literature is phenomenal. He was prolific in his output. He covered political, social and spiritual themes. The songs and poems composed by Bharati are very often used in Tamil cinema and have become staples in the literary and musical repertoire of Tamil artistes throughout the world. He paved the way for modern blank verse.