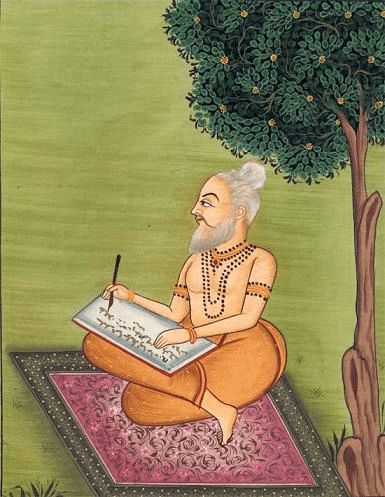 Valmiki (vɑːlˈmiːki; Sanskrit: वाल्मीकि, Vālmīki) is celebrated as the harbinger-poet in Sanskrit literature. The epic Ramayana, dated variously from 5th century BCE to first century BCE, is attributed to him, based on the attribution in the text itself. He is revered as Ādi Kavi, the first poet, author of Ramayana, the first epic poem.
Ramayana, originally written by Valmiki, consists of 24,000 shlokas and 7 cantos (kaṇḍas) including Uttara Kanda. is composed of about 480,002 words, being a quarter of the length of the full text of the Mahabharata or about four times the length of the Iliad. The Ramayana tells the story of a prince, Rama of the city of Ayodhya in the Kingdom of Kosala, whose wife Sita is abducted by Ravana, the demon-king (Rakshasa) of Lanka. The Valmiki Ramayana is dated variously from 500 BCE to 100 BCE or about co-eval with early versions of the Mahabharata. As with many traditional epics, it has gone through a process of interpolations and redactions, making it impossible to date accurately.
British satirist Aubrey Menen says that Valmiki was, "recognized as a literary genius," and thus was considered, "an outlaw," presumably because of his, "philosophic scepticism," as part of an "Indian Enlightenment" period. Valmiki is also quoted to be the contemporary of Rama. Menen claims Valmiki is, "the first author in all history to bring himself into his own composition." Rama met Valmiki during his period of exile and interacted with him. Valmiki gave shelter to Sita in his hermitage when Rama banished her. Kusha and Lava, the twin sons of Shri Rama were born to Sita in this hermitage. Valmiki taught Ramayana to Kusha and Lava, who later sang the divine story in Ayodhya during the Ashwamedha yajna congregation, to the pleasure of the audience, whereupon, King Rama questioned who they were and later visited Valmiki's hermitage to confirm if Sita, the two children claimed as their mother was in fact his wife in exile. Later, he summoned them to his royal palace. Kusha and Lava sang the story of Rama there and Rama confirmed that whatever had been sung by these two children was entirely true.