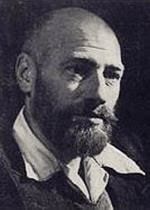 Joseph Ward Moore (August 10, 1903 – January 29, 1978) was an American science fiction writer. According to The Encyclopedia of Science Fiction, "he contributed only infrequently to the field, [but] each of his books became something of a classic."
==Writer== Moore began publishing with the novel Breathe the Air Again (1942), about the onset of the Great Depression. The story is told from multiple viewpoints, and Ward Moore himself appears briefly as a character in the novel.
His most famous work is the alternate history novel Bring the Jubilee (1953). This novel, narrated by Hodge Backmaker, tells of a world in which the South won the American Civil War, leaving the North in ruins.
Moore's other novels include Cloud By Day, in which a brush fire threatens a town in Topanga Canyon; Greener Than You Think, a novel about unstoppable Bermuda Grass; Joyleg (co-authored with Avram Davidson), which assumes the survival of the State of Franklin; and Caduceus Wild (co-authored with Robert Bradford), about a medarchy, a nation governed by physicians.
Moore is also known for the two short stories (since collected) "Lot" (1953) and "Lot's Daughter" (1954) which are postapocalyptic tales with parallels to the Bible. The film Panic in Year Zero! (1962) was (without giving credit) based on Lot and Lot's Daughter. His short story "Adjustment", in which an ordinary man adjusts to a never-never land in which his wishes are fulfilled, and makes the environment adjust to him as well, has been reprinted several times.