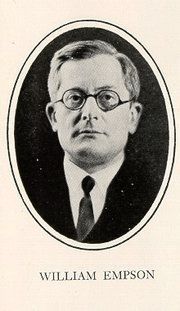 Sir William Empson (27 September 1906 – 15 April 1984) was an English literary critic and poet, widely influential for his practice of closely reading literary works, a practice fundamental to New Criticism. His best-known work is his first, Seven Types of Ambiguity, published in 1930.
Jonathan Bate has written that the three greatest English literary critics of the 18th, 19th and 20th centuries are Johnson, Hazlitt and Empson, "not least because they are the funniest".