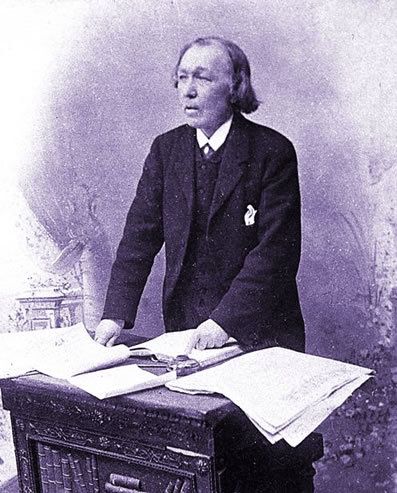 William Topaz McGonagall (March 1825 – 29 September 1902) was a Scottish weaver, poet and actor. He won notoriety as an extremely bad poet who exhibited no recognition of, or concern for, his peers' opinions of his work.
He wrote about 200 poems, including "The Tay Bridge Disaster" and "The Famous Tay Whale", which are widely regarded as some of the worst in English literature. Groups throughout Scotland engaged him to make recitations from his work, and contemporary descriptions of these performances indicate that many listeners were appreciating McGonagall's skill as a comic music hall character. Collections of his verse remain popular, with several volumes available today.
McGonagall has been lampooned as the worst poet in British history. The chief criticisms are that he is deaf to poetic metaphor and unable to scan correctly. His only apparent understanding of poetry was his belief that it needed to rhyme. McGonagall's fame stems from the humorous effects these shortcomings are considered to generate in his work. Scholars argue that his inappropriate rhythms, weak vocabulary, and ill-advised imagery combine to make his work amongst the most unintentionally amusing dramatic poetry in the English language. His work is in a long tradition of narrative ballads and verse written and published about great events and tragedies, and widely circulated among the local population as handbills. In an age before radio and television, their voice was one way of communicating important news to an avid public.