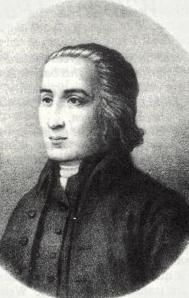 William Williams Pantycelyn (11 February 1717 – 11 January 1791), also known as William Williams, William Pantycelyn, and Pantycelyn, is generally seen as Wales's most famous hymn writer. As a writer of poetry and prose, he is also considered today as one of the great literary figures of Wales. In religious matters he was one of the leaders, along with Howell Harris and Daniel Rowland, of the 18th-century Welsh Methodist revival.