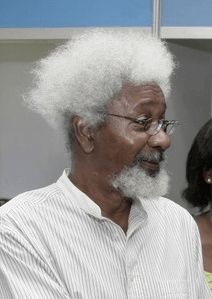 Akinwande Oluwole Babatunde Soyinka (Yoruba: Akinwándé Oluwo̩lé Babátúndé S̩óyinká (born 13 July 1934), known as Wole Soyinka (wɔlé ʃójĩŋká), is a Nigerian playwright, poet and essayist. He was awarded the 1986 Nobel Prize in Literature, the first African to be honoured in that category.
Soyinka was born into a Yoruba family in Abeokuta. After studying in Nigeria and the UK, he worked with the Royal Court Theatre in London. He went on to write plays that were produced in both countries, in theatres and on radio. He took an active role in Nigeria's political history and its struggle for independence from Great Britain. In 1965, he seized the Western Nigeria Broadcasting Service studio and broadcast a demand for the cancellation of the Western Nigeria Regional Elections. In 1967 during the Nigerian Civil War, he was arrested by the federal government of General Yakubu Gowon and put in solitary confinement for two years.
Soyinka has been a strong critic of successive Nigerian governments, especially the country's many military dictators, as well as other political tyrannies, including the Mugabe regime in Zimbabwe. Much of his writing has been concerned with "the oppressive boot and the irrelevance of the colour of the foot that wears it". During the regime of General Sani Abacha (1993–98), Soyinka escaped from Nigeria on a motorcycle via the "NADECO Route." Abacha later proclaimed a death sentence against him "in absentia." With civilian rule restored to Nigeria in 1999, Soyinka returned to his nation.
In Nigeria, Soyinka was a Professor of Comparative Literature (1975 to 1999) at the Obafemi Awolowo University, then called the University of Ife. With civilian rule restored to Nigeria in 1999, he was made professor emeritus. While in the United States, he first taught at Cornell University as Goldwin Smith professor for African Studies and Theatre Arts from 1988-1991 and then at Emory University where in 1996 he was appointed Robert W. Woodruff Professor of the Arts. Soyinka has been a Professor of Creative Writing at the University of Nevada, Las Vegas and has served as scholar-in-residence at NYU’s Institute of African American Affairs and at Loyola Marymount University in Los Angeles, California, US. He has also taught at the universities of Oxford, Harvard and Yale.
In December 2017, he was awarded the Europe Theatre Prize in the "Special Prize" category awarded to someone who has “contributed to the realisation of cultural events that promote understanding and the exchange of knowledge between peoples”.