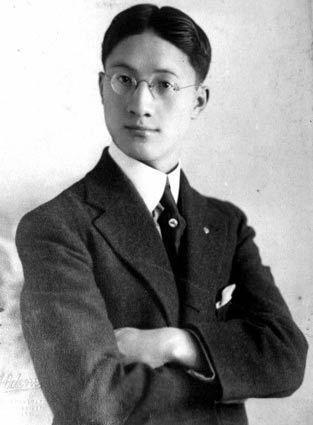 Xu Zhimo (January 15, 1897 – November 19, 1931) was an early 20th-century Chinese poet. Xu Zhimo, original name Xu Yousen, pseudonyms Nanhu and Shizhe (b. 1896, Xiashi, Zhejiang province, China—d. Nov. 19, 1931, Jinan, Shandong province), was a free-thinking Chinese poet who strove to loosen Chinese poetry from its traditional forms, and to reshape it under the influences of Western poetry and the vernacular Chinese language.
One of the most renowned romantic poets of 20th-century Chinese literature, he is known for his promotion of modern Chinese poetry and made contributions to modern Chinese literature.
"Returning to China in 1922, Xu Zhimo began writing poems and essays in the vernacular style. He fell under the influence of the Indian poet Rabindranath Tagore while he was serving as interpreter for him during a lecture tour of China. All the foreign literature to which Xu Zhimo had been exposed served to shape his own poetry and establish him as a leader in the modern poetry movement in China." He helped bring big changes to Chinese literature from that period.
To commemorate Xu Zhimo, in July 2008, a stone of white Beijing marble was installed at the Backs of King's College, Cambridge (near the bridge over the River Cam); Xu's best-known poem called (variously translated as "On Leaving Cambridge", "Saying Goodbye to Cambridge Again", "Goodbye Again, Cambridge", "Leaving the Revisited Cambridge" etc.). A collection of Xu's poetry with English translations was published by Oleander Press Cambridge in 2012.