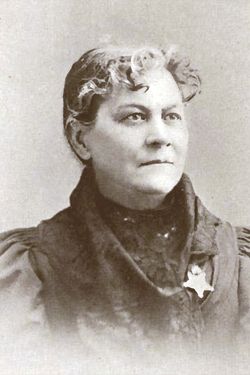 Addie Lucia Ballou (April 29, 1838 – August 10, 1916) was an American suffragist, poet, artist, author, and lecturer.
Ballou took an active part in the Spiritualist movement as a writer and lecturer. Her reform and philanthropy interests included prisons, the unfortunates, and fallen women. She supported Victoria Woodhull in her campaign for President of the United States in 1872.
Later, as a pioneer of California, Ballou continued her Spiritualist writing and lecturing, suffrage work, and campaigning for political change for women. She became the second female notary public in that state in 1891.
She also developed her artistic talents while studying painting at the San Francisco School of Design. In 1897 she was commissioned to paint the official portrait of the 18th governor of California, Henry Markham.