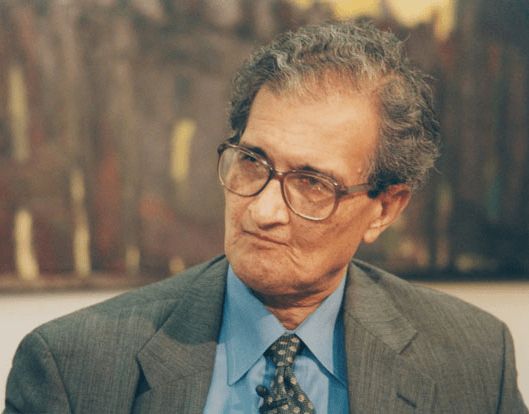 Amartya Kumar Sen, CH, FBA (ˈɔmort:o ˈʃen; born 3 November 1933) is an Indian economist and philosopher, who since 1972 has taught and worked in India, the United Kingdom, and the United States. Sen has made contributions to welfare economics, social choice theory, economic and social justice, economic theories of famines, and indices of the measure of well-being of citizens of developing countries.
He is the Thomas W. Lamont University Professor at Harvard University and member of faculty at Harvard Law School. He is a Fellow of Trinity College, Cambridge and was awarded the Nobel Memorial Prize in Economic Sciences in 1998 and India's Bharat Ratna in 1999 for his work in welfare economics. In 2017, Sen was awarded the Johan Skytte Prize in Political Science for most valuable contribution to Political Science.
In 2004, Sen was ranked number 14 in BBC's poll of the Greatest Bengali of all time.