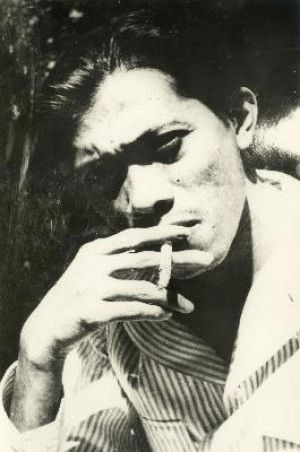 Chairil Anwar (26 July 1922 – 28 April 1949) was an Indonesian poet and member of the "1945 Generation" of writers. He is estimated to have written 96 works, including 70 individual poems.
Anwar was born and raised in Medan, North Sumatra, before moving to Batavia with his mother in 1940, where he began to enter the local literary circles. After publishing his first poem in 1942, Anwar continued to write. However, his poems were at times censored by the Japanese, then occupying Indonesia. Living rebelliously, Anwar wrote extensively, often about death. He died in Jakarta of an unknown illness.
His work dealt with various themes, including death, individualism, and existentialism, and were often multi-interpretable. Drawing influence from foreign poets, Anwar used everyday language and new syntax to write his poetry, which has been noted as aiding the development of the Indonesian language. His poems were often constructed irregularly, but with individual patterns.