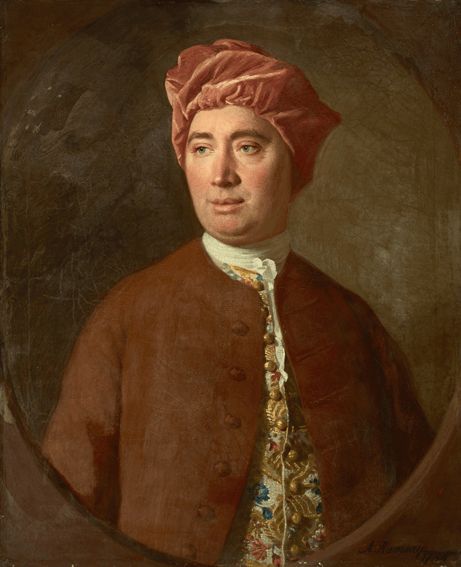 David Hume (hjuːm; born David Home; 7 May 1711 NS (26 April 1711 OS) – 25 August 1776) was a Scottish Enlightenment philosopher, historian, economist, and essayist, who is best known today for his highly influential system of philosophical empiricism, skepticism, and naturalism. Hume's empiricist approach to philosophy places him with John Locke, George Berkeley, Francis Bacon and Thomas Hobbes as a British Empiricist.Atherton 1999 Beginning with his A Treatise of Human Nature (1739), Hume strove to create a total naturalistic science of man that examined the psychological basis of human nature. Against philosophical rationalists, Hume held that passion rather than reason governs human behaviour. Hume argued against the existence of innate ideas, positing that all human knowledge is founded solely in experience; Hume thus held that genuine knowledge must either be directly traceable to objects perceived in experience, or result from abstract reasoning about relations between ideas which are derived from experience, calling the rest "nothing but sophistry and illusion",Hume 1777 a dichotomy later given the name Hume's fork.
In what is sometimes referred to as Hume's problem of induction, he argued that inductive reasoning and belief in causality cannot be justified rationally; instead, our trust in causality and induction result from custom and mental habit, and are attributable only to the experience of "constant conjunction" of events. This is because we can never actually perceive that one event causes another, but only that the two are always conjoined. Accordingly, to draw any causal inferences from past experience it is necessary to presuppose that the future will resemble the past, a presupposition which cannot itself be grounded in prior experience.
Hume's opposition to the teleological argument for God's existence, the argument from design, is generally regarded as the most intellectually significant attempt to rebut the argument prior to Darwinism.
Hume was also a sentimentalist who held that ethics are based on emotion or sentiment rather than abstract moral principle, famously proclaiming that "Reason is, and ought only to be the slave of the passions". Hume's moral theory has been seen as a unique attempt to synthesise the modern sentimentalist moral tradition to which Hume belonged, with the virtue ethics tradition of ancient philosophy, with which Hume concurred in regarding traits of character, rather than acts or their consequences, as ultimately the proper objects of moral evaluation. Hume maintained an early commitment to naturalistic explanations of moral phenomena, and is usually taken to have first clearly expounded the is–ought problem, or the idea that a statement of fact alone can never give rise to a normative conclusion of what ought to be done. Hume also denied that humans have an actual conception of the self, positing that we experience only a bundle of sensations, and that the self is nothing more than this bundle of causally-connected perceptions. Hume's compatibilist theory of free will takes causal determinism as fully compatible with human freedom.
Hume influenced utilitarianism, logical positivism, Immanuel Kant, the philosophy of science, early analytic philosophy, cognitive science, theology, and other movements and thinkers. Kant himself credited Hume as the spur to his philosophical thought who had awakened him from his "dogmatic slumbers".