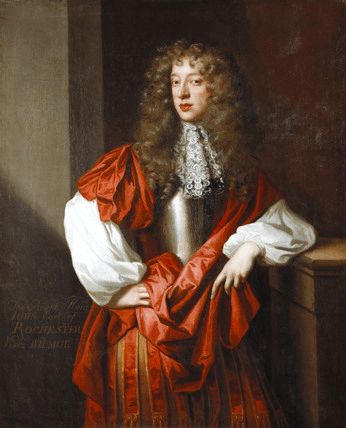 John Wilmot (1 April 1647 – 26 July 1680) was an English poet and courtier of King Charles II's Restoration court. The Restoration reacted against the "spiritual authoritarianism" of the Puritan era. Lord Rochester was the embodiment of the new era, and he is as well known for his rakish lifestyle as his poetry, although the two were often interlinked. He died at the age of 33 from venereal disease.
Lord Rochester's contemporary Andrew Marvell described him as "the best English satirist," and he is generally considered to be the most considerable poet and the most learned among the Restoration wits. His poetry, despite being widely censored during the Victorian era, enjoyed a revival from the 1920s onwards, with notable champions including Graham Greene and Ezra Pound. The critic Vivian de Sola Pinto linked Rochester's libertinism to Hobbesian materialism. During his lifetime, he was best known for A Satyr Against Reason and Mankind, and it remains among his best known works today.