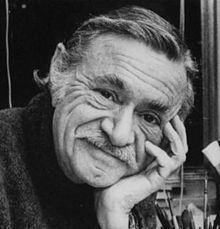 Ezra Jack Keats (March 11, 1916 – May 6, 1983) was an American writer and illustrator of children's books. He won the 1963 Caldecott Medal for illustrating The Snowy Day, which he also wrote. It is considered one of the most important American books of the 20th century.
Keats is best known for introducing multiculturalism into mainstream American children's literature. He was one of the first children’s book authors to use an urban setting for his stories and he developed the use of collage as a medium for illustration.