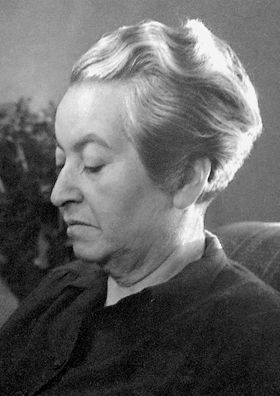 Lucila Godoy Alcayaga (luˈsila ɣoˈdoj alkaˈʝaɣa; 7 April 1889 – 10 January 1957), known by her pseudonym Gabriela Mistral (ɡaˈβɾjela misˈtɾal), was a Chilean poet-diplomat, educator and humanist. In 1945 she became the first Latin American author to receive a Nobel Prize in Literature, "for her lyric poetry which, inspired by powerful emotions, has made her name a symbol of the idealistic aspirations of the entire Latin American world". Some central themes in her poems are nature, betrayal, love, a mother's love, sorrow and recovery, travel, and Latin American identity as formed from a mixture of Native American and European influences. Her portrait also appears on the 5,000 Chilean peso bank note.