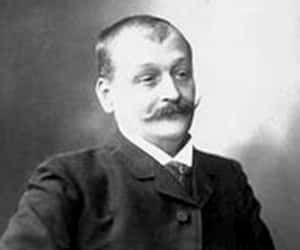 Georges Courteline born Georges Victor Marcel Moinaux (25 June 1858 – 25 June 1929) was a French dramatist and novelist, a satirist notable for his sharp wit and cynical humor.
His family moved from Tours in Indre-et-Loire to Paris shortly after his birth. During the time of the Paris Commune, at age 13, he was sent to school in Meaux and after graduation in 1876, he went on to serve in the French military before taking a job as a civil servant. Interested in poetry and authorship, he became involved writing poetry reviews and was part of a small newspaper. By the 1890s, he had begun writing plays under the name Courteline for the theatres of Montmartre where he lived.
Gifted with a quick wit, he became a leading dramatist, producing many plays as well as a number of novels. The overall tone of his works was satirical in nature, often making fun of everything from the wealthy elitists of Paris to the bloated government bureaucracies. In 1899, Courteline was awarded the Legion of Honour and in 1926 was elected to the Académie Goncourt.
In 1929, Courteline died on his 71st birthday in Paris and was interred there in the Père Lachaise Cemetery. Rue de Lariche, the street in the city of Tours where he was born, was renamed in his honour.