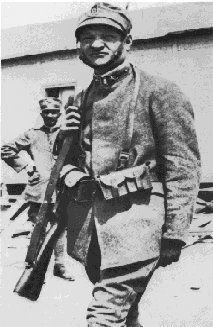 Giuseppe Ungaretti (dʒuˈzɛppe uŋɡaˈretti; 8 February 1888 – 2 June 1970) was an Italian modernist poet, journalist, essayist, critic, academic, and recipient of the inaugural 1970 Neustadt International Prize for Literature. A leading representative of the experimental trend known as Ermetismo ("Hermeticism"), he was one of the most prominent contributors to 20th century Italian literature. Influenced by symbolism, he was briefly aligned with futurism. Like many futurists, he took an irredentist position during World War I. Ungaretti debuted as a poet while fighting in the trenches, publishing one of his best-known pieces, L'allegria ("The Joy").
During the interwar period, Ungaretti was a collaborator of Benito Mussolini (whom he met during his socialist accession), as well as a foreign-based correspondent for Il Popolo d'Italia and Gazzetta del Popolo. While briefly associated with the Dadaists, he developed Hermeticism as a personal take on poetry. After spending several years in Brazil, he returned home during World War II, and was assigned a teaching post at the University of Rome, where he spent the final decades of his life and career. His fascist past was the subject of controversy.