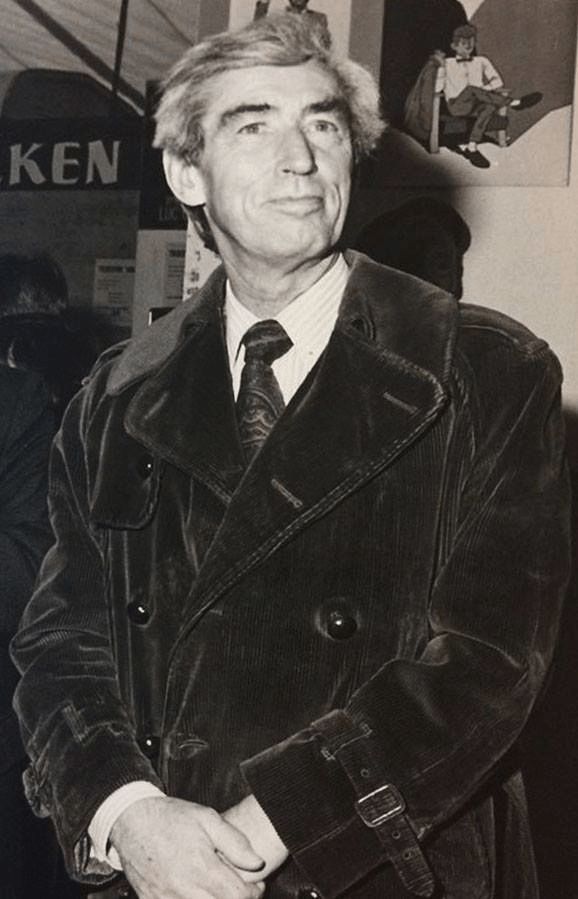 Georges Prosper Remi (ʁəmi; 22 May 1907 – 3 March 1983), known by the pen name Hergé (ɛʁʒe), was a Belgian cartoonist. He is best known for creating The Adventures of Tintin, the series of comic albums which are considered one of the most popular European comics of the 20th century. He was also responsible for two other well-known series, Quick & Flupke (1930–40) and The Adventures of Jo, Zette and Jocko (1936–57). His works were executed in his distinct ligne claire drawing style.
Born to a lower middle-class family in Etterbeek, Brussels, Hergé began his career by contributing illustrations to Scouting magazines, developing his first comic series, The Adventures of Totor, for Le Boy-Scout Belge in 1926. Working for the conservative Catholic newspaper Le Vingtième Siècle, he created The Adventures of Tintin in 1929 on the advice of its editor Norbert Wallez. Revolving around the actions of boy reporter Tintin and his dog Snowy, the series' early installments – Tintin in the Land of the Soviets, Tintin in the Congo, and Tintin in America – were designed as conservative propaganda for children. Domestically successful, after serialisation the stories were published in book form, with Hergé continuing the series and also developing both the Quick & Flupke and Jo, Zette and Jocko series for Le Vingtième Siècle. Influenced by his friend Zhang Chongren, from 1934 Hergé placed far greater emphasis on conducting background research for his stories, resulting in increased realism from The Blue Lotus onward. Following the German occupation of Belgium in 1940, Le Vingtième Siècle was closed but Hergé continued his series in Le Soir, a popular newspaper controlled by the Nazi administration.
After the Allied liberation of Belgium in 1944, Le Soir was shut down and its staff – including Hergé – accused of having been collaborators. An official investigation was launched, and while no charges were brought against Hergé, in subsequent years he repeatedly faced accusations of having been a traitor and collaborator. With Raymond Leblanc he established Tintin magazine in 1946, through which he serialised new Adventures of Tintin stories. As the magazine's artistic director, he also oversaw the publication of other successful comics series, such as Edgar P. Jacobs' Blake and Mortimer. In 1950 he established Studios Hergé as a team to aid him in his ongoing projects; prominent staff members Jacques Martin and Bob de Moor greatly contributed to subsequent volumes of The Adventures of Tintin. Amid personal turmoil following the collapse of his first marriage, he produced Tintin in Tibet, his personal favourite of his works. In later years he became less prolific, and unsuccessfully attempted to establish himself as an abstract artist.
Hergé's works have been widely acclaimed for their clarity of draughtsmanship and meticulous, well-researched plots. They have been the source of a wide range of adaptations, in theatre, radio, television, cinema, and computer gaming. He remains a strong influence on the comic book medium, particularly in Europe.Assouline 2009London Review of Books 2012 Widely celebrated in Belgium, a Hergé Museum was established in Louvain-la-Neuve in 2009.