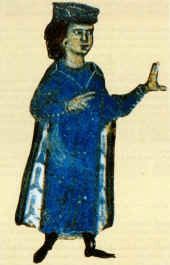 William IX (Guilhèm de Peitieus; Guilhem de Poitou Guillaume de Poitiers},) (22 October 1071 – 10 February 1127), called the Troubador, was the Duke of Aquitaine and Gascony and Count of Poitou (as William VII) between 1086 and his death. He was also one of the leaders of the Crusade of 1101. Though his political and military achievements have a certain historical importance, he is best known as the earliest troubadour — a vernacular lyric poet in the Occitan language — whose work survived.