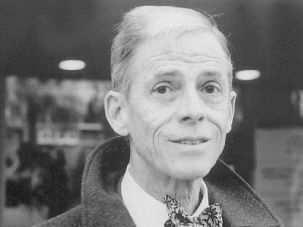 For the South Carolina politician see James Merrill (politician)
James Ingram Merrill (March 3, 1926 – February 6, 1995) was an American poet. He was awarded the Pulitzer Prize for poetry in 1977 for Divine Comedies. His poetry falls into two distinct bodies of work: the polished and formalist lyric poetry of his early career, and the epic narrative of occult communication with spirits and angels, titled The Changing Light at Sandover (published in three volumes from 1976 to 1980), which dominated his later career. Although most of his published work was poetry, he also wrote essays, fiction, and plays. He also made a cameo in the 1992 film Lorenzo's Oil in a symposium scene where he played a questioning doctor, due to filmmakers' wanting to emphasize the "everyman" storyline.