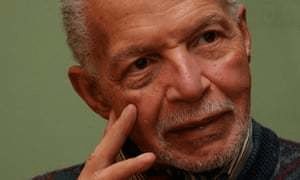 Jan Rynveld Carew (24 September 1920 – 6 December 2012) was a Guyana-born novelist, playwright, poet and educator, who lived at various times in The Netherlands, Mexico, England, France, Spain, Ghana, Jamaica, Canada and the United States. His works, diverse in form and multifaceted, make Jan Carew an important intellectual of the Caribbean world. His poetry and his first two novels, Black Midas and The Wild Coast (both published in 1958 by Secker & Warburg in London), were significant landmarks of the West Indian literature then attempting to cope with its colonial past and assert its wish for autonomy. He worked with the late President Cheddi Jagan in the fight for Guianese independence. Carew also played an important part in the Black movement gaining strength in England and North America, publishing reviews and newspapers, producing programs and plays for the radio and the television. His scholarly research drove him to question traditional historiographies and the prevailing historical models of the conquest of America. The way he reframed Christopher Columbus as an historical character outside his mythical hagiography became a necessary path in his mind to build anew the Caribbean world on sounder foundations.