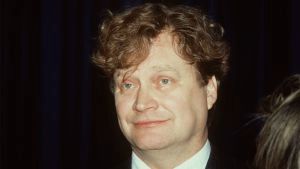 Jarkko Laine (17 March 1947 – 19 August 2006) was a Finnish poet and a writer of prose and plays. He also translated American literature to Finnish.
Jarkko Laine was born in Turku, Finland. He became known from the 1960s underground movement, deriving inspiration from popular culture, pop music and comics. He provided some lyrics for the band Suomen Talvisota 1939–1940, and for popular singer Rauli Badding Somerjoki he wrote such song lyrics as 'Bensaa suonissa', 'Hymyile Miss Universum' and 'Pilvet karkaa, niin minäkin' (the latter being the title song of Aki Kaurismäki's film Drifting Clouds). Jarkko Laine was the editorial assistant for the literature magazine Parnasso in the years 1969–1986 and its editor-in-chief in the years 1987–2002. He was also the President of The Union of Finnish Writers in the years 1987–2002.