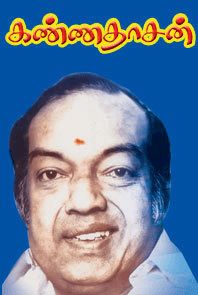 Kannadasan Ta-கண்ணதாசன்.ogg pronunciation (24 June 1927 – 17 October 1981) was a Tamil poet and lyricist, heralded as one of the greatest and most important lyricists in India. Frequently called Kaviarasu or Kavirajar (King of Poets), Kannadasan was most familiar for his song lyrics in Tamil films and contributed around 5000 film lyrics apart from 6000 poems and 232 books, including novels, epics, plays, essays, his most popular being the 10-part religious essay on Hinduism, Artthamulla Indhumatham (Meaningful Hindu Religion). He won the Sahitya Akademi Award for his novel Cheraman Kadali in the year 1980 and was the first to receive the National Film Award for Best Lyrics, given in 1969 for the film Kuzhanthaikkaga.