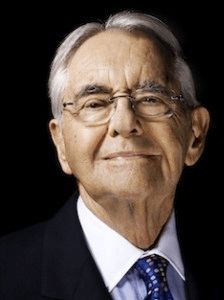 the Australian rules footballer Len Peterson (footballer) Leonard Byron Peterson (15 March 1917 – 28 February 2008) was a Canadian playwright, screenwriter and novelist. His career started in 1939 when he sold a script to the Canadian Broadcasting Corporation. He has written more than a thousand different dramatic works for stage, screen, television, and radio.
One of his earliest successes was the radio play They're All Afraid (1944), which was written for the CBC program Stage '44. The play received much criticism for depicting life in Canada negatively at a time when it was thought that boosting wartime morale was more appropriate. They're All Afraid went on to win the award for best drama in a broadcasting festival in Ohio. It was later adapted by Peterson for the stage.