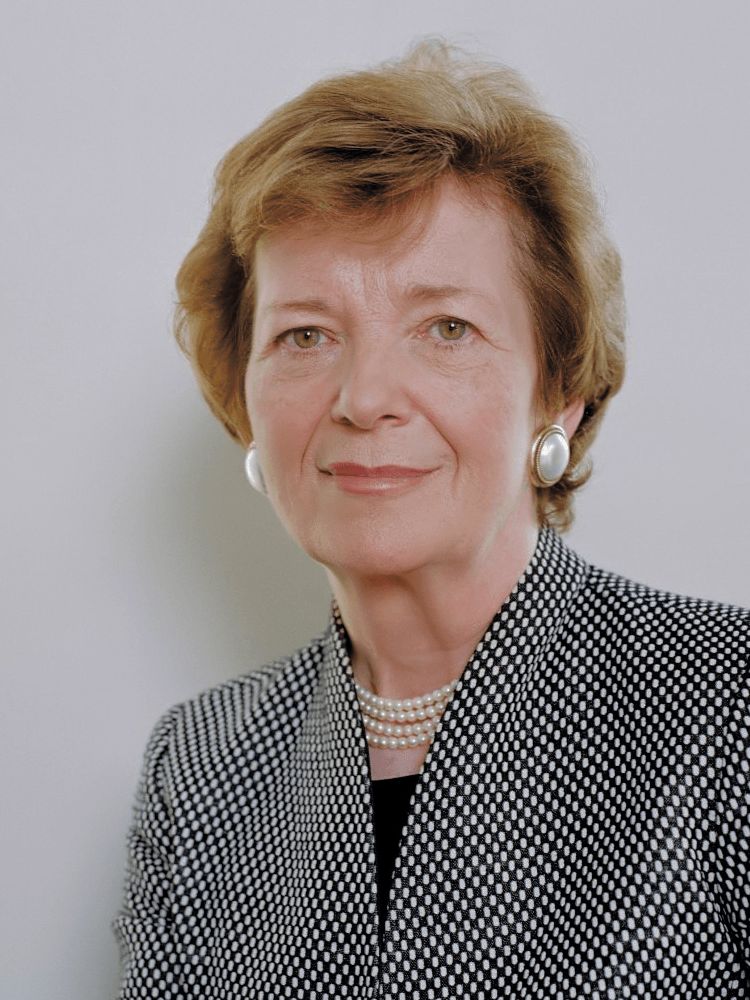 Mary Therese Winifred Robinson (née Bourke; Máire Bean Mhic Róibín; born 21 May 1944) is an Irish Independent politician who served as the 7th President of Ireland, becoming the first woman to hold this office. She also served as United Nations High Commissioner for Human Rights from 1997 to 2002 and a Senator for the University of Dublin from 1969 to 1989. She first rose to prominence as an academic, barrister and campaigner. She defeated Fianna Fáil's Brian Lenihan and Fine Gael's Austin Currie, in the 1990 presidential election, becoming the first Independent candidate nominated by the Labour Party, the Workers' Party and Independent Senators. She was the first elected President in the office's history not to have had the support of Fianna Fáil.
She is widely regarded as a transformative figure for Ireland, and for the Irish presidency, revitalising and liberalising a previously conservative, low-profile political office. She resigned the presidency two months ahead of the end of her term of office to take up her post in the United Nations. During her UN tenure she visited Tibet (1998), the first High Commissioner to do so; she criticised Ireland's immigrant policy; and criticised the use of capital punishment in the United States. She extended her intended single four-year term by a year to preside over the World Conference against Racism 2001 in Durban, South Africa; the conference proved controversial. Under continuing pressure from the U.S., Robinson resigned her post in September 2002.
After leaving the UN in 2002, Robinson formed Realizing Rights: the Ethical Globalization Initiative, which came to a planned end at the end of 2010. Its core activities were 1) fostering equitable trade and decent work, 2) promoting the right to health and more humane migration policies, and 3) working to strengthen women's leadership and encourage corporate social responsibility. The organisation also supported capacity building and good governance in developing countries. Robinson returned to live in Ireland at the end of 2010, and has set up The Mary Robinson Foundation - Climate Justice, which aims to be 'a centre for thought leadership, education and advocacy on the struggle to secure global justice for those many victims of climate change who are usually forgotten - the poor, the disempowered and the marginalised across the world.'
Robinson is Chairman of the Institute for Human Rights and Business and Chancellor of the University of Dublin. Since 2004, she has also been Professor of Practice in International Affairs at Columbia University, where she teaches international human rights. Robinson also visits other colleges and universities where she lectures on human rights. Robinson sits on the board of the Mo Ibrahim Foundation, an organisation which supports good governance and great leadership in Africa, and is a member of the Foundation's Ibrahim Prize Committee. Robinson is also a B Team Leader, alongside Richard Branson, Jochen Zeitz and a group of leaders from business and civil society as part of The B Team. Robinson is an Extraordinary Professor in the Centre for Human Rights and the Centre for Sexualities, AIDS and Gender at the University of Pretoria. Robinson served as Oxfam's honorary president from 2002 until she stepped down in 2012 and is honorary president of the European Inter-University Centre for Human Rights and Democratisation EIUC since 2005. She is Chairman of the International Institute for Environment and Development (IIED) and is also a founding member and chairman of the Council of Women World Leaders. Robinson was a member of the European members of the Trilateral Commission.
In 2004, she received Amnesty International's Ambassador of Conscience Award for her work in promoting human rights.