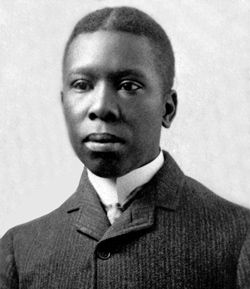 Paul Laurence Dunbar (June 27, 1872 – February 9, 1906) was an American poet, novelist, and playwright of the late 19th and early 20th centuries. Born in Dayton, Ohio, to parents who had been enslaved in Kentucky before the American Civil War, Dunbar began to write stories and verse when still a child; he was president of his high school's literary society. He published his first poems at the age of 16 in a Dayton newspaper.
Much of Dunbar's more popular work in his lifetime was written in the "Negro dialect" associated with the antebellum South, though he also used the Midwestern regional dialect of James Whitcomb Riley. Dunbar's work was praised by William Dean Howells, a leading editor associated with the Harper's Weekly, and Dunbar was one of the first African-American writers to establish an international reputation. He wrote the lyrics for the musical comedy In Dahomey (1903), the first all-African-American musical produced on Broadway in New York. The musical later toured in the United States and the United Kingdom.
Dunbar also wrote in conventional English in other poetry and novels. Since the late 20th century, scholars have become more interested in these other works. Suffering from tuberculosis, which then had no cure, Dunbar died in Dayton, Ohio at the age of 33.