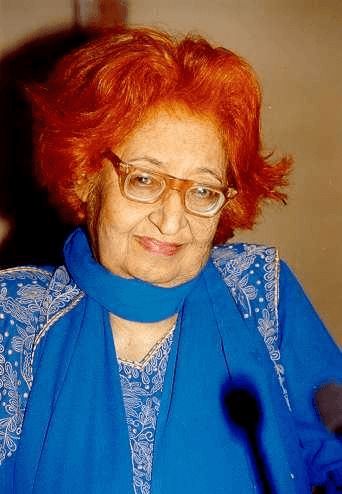 Qurratulain Hyder (20 January 1927 – 21 August 2007) was an influential Indian Urdu novelist and short story writer, an academic, and a journalist. One of the most outstanding literary names in Urdu literature, she is best known for her magnum opus, Aag Ka Darya (River of Fire), a novel first published in Urdu in 1959, from Lahore, Pakistan, that stretches from the 4th century BC to post partition of India. Popularly known as "Ainee Apa" among her friends and admirers, she was the daughter of writer and pioneers of Urdu short story writing Sajjad Haidar Yildarim (1880–1943). Her mother, Nazar Zahra, who wrote at first as Bint-i-Nazrul Baqar and later as Nazar Sajjad Hyder (1894–1967), was also a novelist and protegee of Muhammadi Begam and her husband Syed Mumtaz Ali, who published her first novel.
She received the 1967 Sahitya Akademi Award in Urdu for Patjhar Ki Awaz (Short stories), 1989 Jnanpith Award for Akhire Shab Ke Humsafar, and the highest award of the Sahitya Akademi, India's National Academy of Letters, the Sahitya Akademi Fellowship in 1994. She also received the Padma Bhushan from the Government of India in 2005.