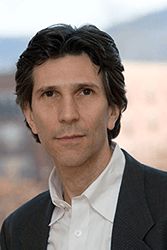 Richard Michelson (born July 3, 1953) is a poet and a children's book author.
In January 2009, As Good As Anybody: Martin Luther King and Abraham Joshua Heschel's Amazing March Toward Freedom, was awarded the Sydney Taylor Book Award Gold Medal from the Association of Jewish Libraries, and A is for Abraham, was awarded the Silver Medal. This is the first time in the award's 50-year history that one author has been honored with their top two awards. Michelson received his 2nd Silver Medal in 2017 and his 2nd Gold Medal in 2018. Additionally, Michelson won the 2017 National Jewish Book Award.
Michelson has twice been a finalist for the National Jewish Book Award (2008, 2006) and twice the recipient of the Skipping Stone Multicultural Book Award (2009, 2003). Other recent recognition include a 2009 Massachusetts Book Award Finalist, a 2007 Teacher’s Choice Award from the International Reading Association, and a 2007 Publisher Weekly Best Book Award.
Clemson University named Michelson as the Richard J. Calhoun Distinguished Reader in American Literature for 2008, and he was the featured poet for the 20th Anniversary edition of Image Journal: Art Faith Mystery. Michelson's poetry has been included in many anthologies, including The Norton Introduction to Poetry, Unsettling America: Contemporary Multicultural Poetry, and Blood to Remember: American Poets on the Holocaust. His latest collection, Battles & Lullabies, published by the University of Illinois Press, was selected as one of the 12 best poetry books of 2006 by ForeWord Magazine.
Michelson has lectured, and read from his works in India, Eastern Europe, and throughout the United States. He represented the United States at the Bratislava Biennial of Children’s Books in 2005. Michelson has written for the New York Times Book Review, Publishers Weekly, Nextbook and other publications. He is the Curator of Exhibitions at the National Yiddish Book Center and owns R. Michelson Galleries in Northampton, Massachusetts.