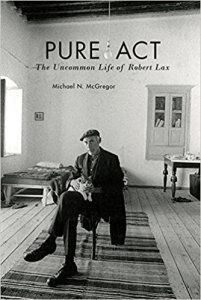 Robert Lax (November 30, 1915 – September 26, 2000) was an American poet, known in particular for his association with famed 20th century Trappist monk and writer Thomas Merton. A third friend of his youth, whose work sheds light on both Lax and Merton, was Ad Reinhardt. During the latter period of his life, Lax resided on the island of Patmos, Greece. Considered by some to be a self-exiled hermit, he nonetheless welcomed visitors to his home on the island, but did nothing to court publicity or expand his literary career or reputation.